A general workflow for data processing methodology can be found in Williams et al. (2012). Key requirements for raw image processing and positional data are as follows:

Scoring of individual images can be done using a number of annotation software tools. Examples include, Transect measure, Coral Point Count, CoralNet and Squidle+. For national consistency Squidle+ (https://squidle.org) is recommended as it is free and allows for different approaches in image subsampling, which appears to influence inferences from data (Monk et al. unpublished data), as well as stratified and random point count distribution on images. It also automatically imports the collected AUV data once it is uploaded to the AODN making it ready for analysis, and has tools for exploring survey data as well as analysis. In addition, it supports multiple annotation schemes, and will provide consistency through translation between schemes, which is an important point that differentiates Squidle+.

There are three approaches recommended for annotating georeferenced imagery from AUVs:

Annotation of individual images or photomosaics can be undertaken using three methods:

Table 4.1: A brief summary of methods for automated benthic image classification. The number of classes and the main taxa included in the respective studies are also shown.

A national AUV steering group has been set up to oversee a nationally coordinated AUV benthic monitoring program which is supported by the Integrated Marine Observing System (IMOS) (Table 4.2). Any new AUV deployments should be discussed with this steering group to ensure that, wherever possible, they can be integrated within the national program [Recommended].

Data quality control at both the collection and annotation stage is critical. Most importantly, the annotation schema needs to be consistent between studies. Morphospecies and associated CATAMI parent classes be used [Recommended]. An initial morphospecies catalogue for southeastern shelf waters is currently held and maintained at the Institute for Marine and Antarctic Studies (IMAS) (contact Dr Neville Barrett or Dr Jacquomo Monk).

Other annotation schema are available, and can be applied. In such situations where an alternative schema are used to annotate AUV imagery, it must be able to be mapped to CATAMI so that comparisons can be made with previous studies or between regions. Translations between schema can be readily applied within Squidle+. The quality control of all annotations undertaken by novice scores should be assessed against an experienced analyst (e.g. using confusion matrices; Figure 4.4). Logically, it is important to correct any discrepancies between annotators. This can be done by re-examining the images to ensure an agreement can be reached between annotators. Alternatively, if an agreement cannot be reached, then the miss-classified morphospecies could be potentially grouped into a higher level CATAMI class. 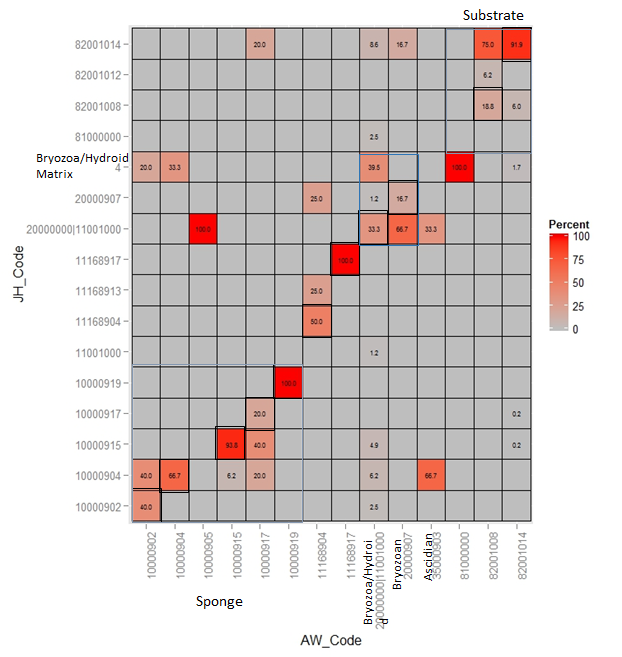 Figure 4.4: Confusion matrix showing the CATAMI classes scored by novice 1 (AW) and experienced (JH) for 30 co-scored images. Black outlined boxes indicate consistent classification between scorers, the percent of all points scored as any particular class are shown in each box and colour coded. Blue outlined boxes indicate sponge, bryozoan/hydroid and substratum respectively moving from left to right across the image.

Squidle+ is a centralised online platform for standardised analysis and annotation of georeferenced imagery and video. Many national marine observing programs (for example IMOS through the Australian Ocean Data Network (AODN) or the Marine Geoscience Data System (MGDS) in the USA) routinely store imagery data online in an openly accessible location. Squidle+ operates based on flexible distributed data storage facilities (i.e. imagery can be stored anywhere in an openly accessible online location) to reduce data duplication and inconsistencies, and provides a flexible annotation system with the capability to translate between different annotation schemes.

Following the steps listed below will ensure the timely release of imagery and associated annotation data in a standardised, highly discoverable format.

The breadth of research questions precludes any detailed advice on the analysis of data from AUV transects. However, one common attribute of the image-based data that will have to be contented with for all analyses is spatial proximity. The closeness of images, within and sometimes between transects, means that image data are unlikely to be independent (due to spatial autocorrelation). Yet, this is an assumption that many statistical methods rely upon. The failure to meet this assumption means that the inferences from the statistical analysis may be: (i) over-confident, e.g. having a p-value that is too small; (ii) biased, i.e. the estimates do not reflect the truth; (iii) both, or; (iv) no effect. Obviously, the fourth category is what a researcher hopes for, but it is improbable and must be validated. However, if it is known that the study organism exhibits particularly low autocorrelation then the analysis need not consider it explicitly.

Methods to analyse data, accounting for autocorrelation are available. These include geostatistical models (see Foster et al. 2014 for AUV-based examples). However, in certain situations subsampling images will help (see Mitchell et al. 2017 for a marine based example), but not necessarily alleviate completely. Further, if the study is for a broad area, where transects are small and are well-separated, then amalgamating data to transect level may also be appropriate.